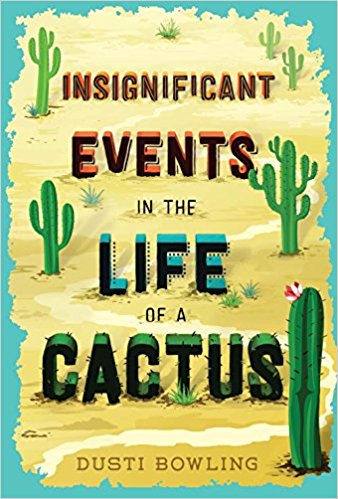 Insignificant Events in the Life of a Cactus

Aven Green didn't lose her arms in an alligator wrestling match or a wildfire in Tanzania.  That's just what she tells people when she gets the "looks."  The truth is Aven was born without arms, but, at age 13, that hasn't stopped her from doing almost anything.  Then her parents take a job running Stagecoach Pass, a rundown Western theme park in Arizona, and Aven has to leave everything she knows behind.

Aven struggles to make friends at her new school, where the kids can't seem to see past her missing arms.  But her life takes another unexpected turn when she meets Connor, a classmate who also feels isolated because of his own disability.  Together, they discover an old storage shed at the park that holds bigger secrets than Aven ever could have imagined.  It's hard to solve a mystery, help a friend, and face your fears.  But Aven's about to find out what she's capable of... and how far from insignificant she is.